Cambridge Global Health Partnerships is part of Addenbrooke’s Charitable Trust. Registered Charity No. 1170103 Company limited by guarantee in England and Wales, No. 10469089

Ike Phemo had a fused jaw bone, meaning that he could barely open his mouth. Day to day actions which we take for granted such as speaking and eating, posed a huge challenge for Ike.

The Cambridge University Hospitals Maxillofacial team, Julian Fraser, Vijay Santhanam and Valmiki Sharma travelled to Botswana in 2016 (see left), as part of the Botswana-Cambridge Maxillofacial campaign. During their visit, they met and subsequently operated on Ike. 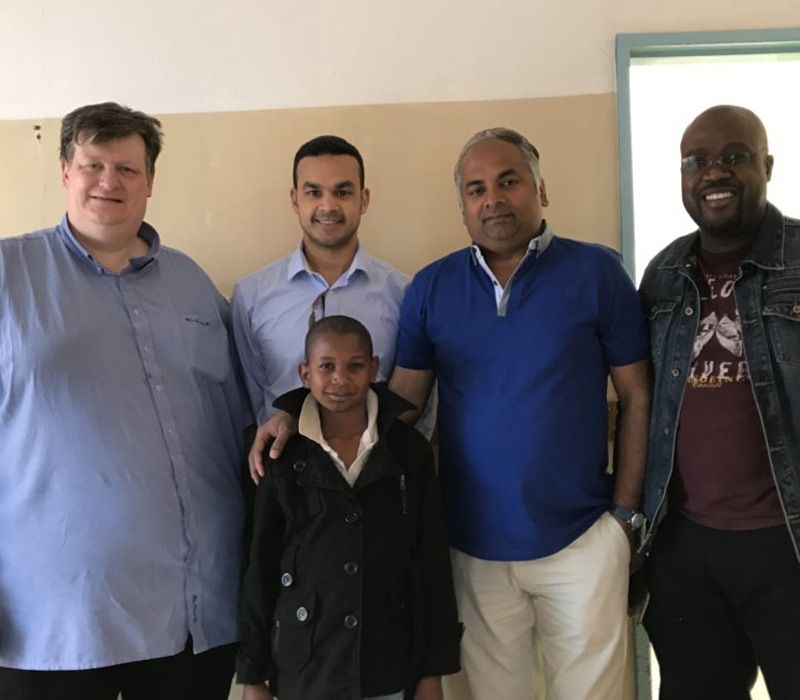 One year later in June 2017, the team returned to Botswana. They met up with Ike, his father and brother at Princess Marina Hospital.

“Ike is turning 13 in a few weeks, we are so happy that he has finally received treatment. Since the surgery he has been eating well and has started to grow.” Because of his fused jaw, eating had been difficult – he had to push food through a tiny gap between his teeth, this meant that he had not been getting enough nutrition.

“His older brother teases him now, saying that he is too fit! He will soon catch up with the other children.”

Johannes has been bringing Ike to Princess Marina Hospital, Gaborone for almost 10 years, but no one could help him.

“Before the operation, he had an accident at school and he accidently got a 50 thebe coin stuck in his mouth. It was so scary because we thought he might swallow it and choke, we couldn’t get it out. It took a while remove it. I am very happy with the progress he has made. He is so happy now and he is eating well.”

Ike’s story is a testament to the skills and capabilities of our health professionals here at CUH. Health partnerships such as this, thus allow us to share skills and knowledge globally, ultimately developing sustainable health systems, and edging ever closer to universal health coverage.

This website uses cookies to improve your experience while you navigate through the website. Out of these, the cookies that are categorized as necessary are stored on your browser as they are essential for the working of basic functionalities of the website. We also use third-party cookies that help us analyze and understand how you use this website. These cookies will be stored in your browser only with your consent. You also have the option to opt-out of these cookies. But opting out of some of these cookies may affect your browsing experience.
Necessary Always Enabled
Necessary cookies are absolutely essential for the website to function properly. These cookies ensure basic functionalities and security features of the website, anonymously.
Functional
Functional cookies help to perform certain functionalities like sharing the content of the website on social media platforms, collect feedbacks, and other third-party features.
Performance
Performance cookies are used to understand and analyze the key performance indexes of the website which helps in delivering a better user experience for the visitors.
Analytics
Analytical cookies are used to understand how visitors interact with the website. These cookies help provide information on metrics the number of visitors, bounce rate, traffic source, etc.
Advertisement
Advertisement cookies are used to provide visitors with relevant ads and marketing campaigns. These cookies track visitors across websites and collect information to provide customized ads.
Others
Other uncategorized cookies are those that are being analyzed and have not been classified into a category as yet.
SAVE & ACCEPT